Thank you for your patience while we retrieve your images.

All photos were made as part of my official duties and are thus public domain. They should be credited to the National Park Service and, optionally, to me as the photographer; for example: 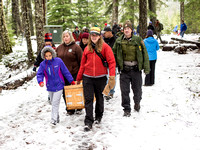 © the light is all
User Agreement
Cancel
Continue